Twitter can be a powerful tool in the classroom.  One way to use Twitter is to set up a class or library account and follow professional authors.  There are many Children’s and Young Adult authors that tweet on a regular basis (see list below), and many of them share how they are progressing on their current projects.  Sometimes, they even tweet about the problems they encountering.  One June day, Laurie Hales Anderson sent various tweets about her writing struggles.  I’ve shown them to students to prove that writing isn’t easy, and it is a process.

Writers also respond sometimes. I set up a Twitter account for my library. Today, Jenny Han, author of The Summer I Turned Pretty, asked her followers who should play Conrad in the movie.  I asked the students in the library that hour.  The students were so excited when Jenny tweeted back! 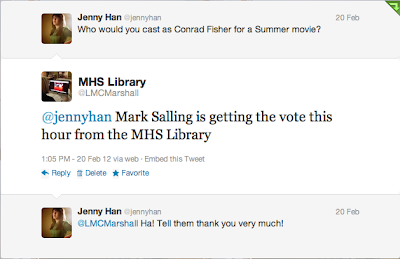 Twitter allows classes to connect with the world outside of the four walls of their classroom or library.  It can show students how others struggle with writing and make it through to the end.  Also, the writers of the novels become more human.  Twitter is a significant tool that can have a meaningful impact on students.

Posted by Emily Dittmar at 1:36 PM